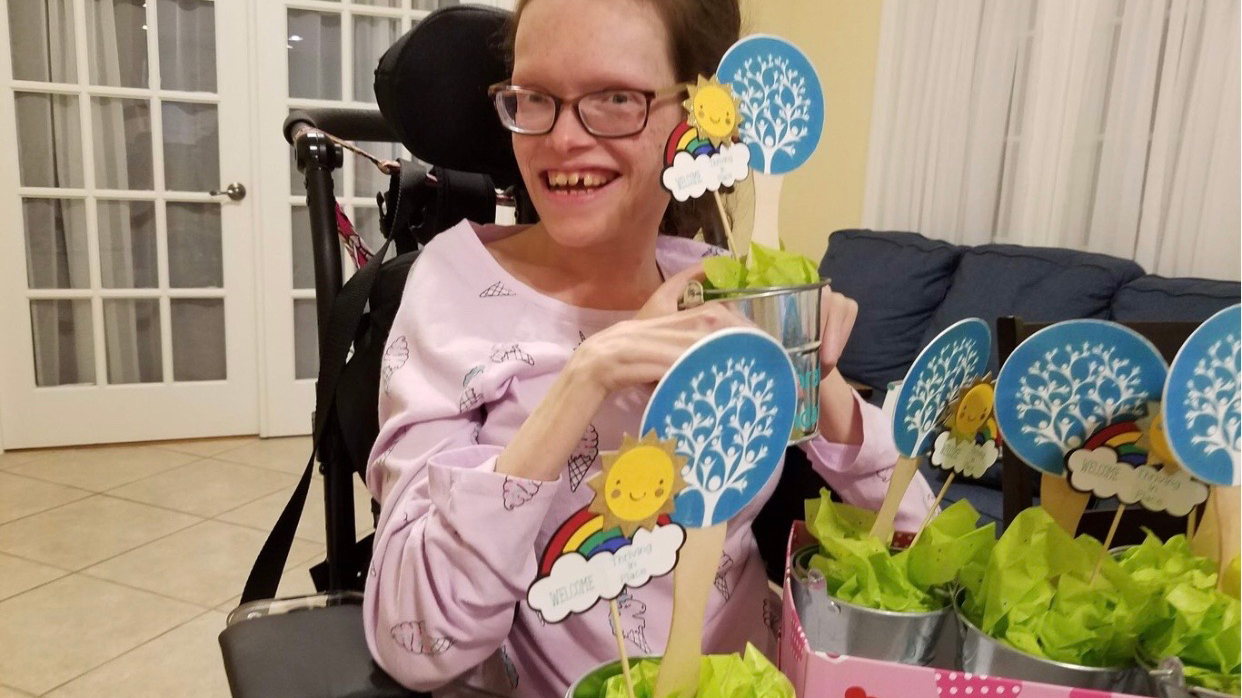 Today’s inspiration comes from Megan, a 26 year old who has cerebral palsy, seizure disorder, learning disability and scoliosis.  She is limited to a wheelchair with minimal use of her hands, and has endured many, many orthopedic surgeries, severe illnesses and hospitalizations.  Her mom, Linda tells her story (warning: get a Kleenex)…

Megan started with a Cricut Expression in 2009. Why a Cricut? She could do schoolwork like science projects and type but her teachers wanted the traditional display board with objective, materials, etc., on the trifold boards, which meant that Erin, her younger sister and I, made the boards. I felt the Cricut Expression would allow her to type the letters on the machine, cut and then use the glue stick – and other than some help gluing it on the board, she was able to finally do the project herself. The Cricut Expression helped level the playing field so to speak for a person who was disabled.

Since our family was very involved in local charities, Megan was asked to make signs for the charities – signs for raffles, basket to auction off, and more.  The signs were able to be used more than once and it allowed her to take part in volunteering.

In 2010, as Megan’s scoliosis got worse and began to affect her lung and heart function, she was slated for a spinal fusion. The surgery was risky and would take a long recovery. I entered Megan in the Cricut-sponsored contest “The Next Big Thing” which was the secret launch of the Cricut Imagine.  We simply had to say whom you felt deserved the next big thing, so I wrote about Megan and the stuff she made to give away and how she was having surgery and whatever the next big thing was, it would help her with recovery. I received a call a few weeks before her surgery from Cricut. Matt W. (CMO) and Jim T. (CEO) shared that Megan was a finalist and wanted to interview her and the other finalists to see who would win. They flew from Utah, along with a camera crew, and as we answered the door they shared that Megan was one of two grand prize winners!  They gave her a trial run with a Cricut Imagine prototype – it wasn’t even available yet! They also gave her another Expression, along with several other machines (Cuttlebug, etc.) to share with her school, and even gave a machine to the young college girls who helped Megan make cards at the time! The generosity was overwhelming.

A short time later, was the official Imagine launch – an event in Chicago – where the machine was first debuted to Members, as well as the commercial showing Megan using it to created, along with hundreds of others.  Through the tears, less than 72 hours before life changing surgery, we saw the love of Cricut creators, all of whom wished Megan well.  All through her recovery she used her machine to make cards for people thanking them. Megan also started to make cards for veterans to thank them for their service and would carry them everywhere we went – stores, charity events, etc. – so she could hand then out to veterans she met along the way.

In 2011, I stumbled upon the NY Yankees HOPE week honoree contest. I wrote about Megan and how she used the Cricut machines to make cards for charity. I wrote about the lemonade stand we did every year for Special Olympics and other charities –how Megan made the signs and served the lemonade. She was chosen to be one of the 2011 HOPE week honorees!

It’s important to note that all during these years, several surgeries took place and she used the Cricut to make cards and posters for charities as part of her recovery. When her hands got worse, the hand surgeon hesitated to operate, stating, “it is not like she uses them anyway!” We showed her the video from the Cricut Imagine launch and the NY Yankees tape showing Megan using the Cricut machines.  By seeing the one year lapse and how her hands had debilitated, the doctor was convinced we should operate. Cricut truly has been part of her rehab.

Megan attended a local high school where students with disabilities often went to “work sites” to clean restaurants, sweep a doctor’s office, set up tables at a catering hall. The school asked what could Megan, as the only kid in a wheelchair, could do. I told them about the gifted Cricut machine and we made a class… I would teach and buy supplies; the kids who were not ready – emotionally, physically, or mentally – would come to class and make cards. At the end of each class, a student would deliver the cards to the vice principal who would put them in an honor basket for teachers and parents to buy and raise money for the school.  All the cards sold out.  The Cricut Class continued through Megan’s years at the school.  When she began a new program, we made cards with the senior citizens who volunteered to be with the young disabled adults, once again using her Cricut. This continued until we moved to Florida. Now Megan takes her card making class and machines to Thriving In Place, a group for senior citizens and disabled adults where they make birthday cards for the members, centerpieces, and so much more.

Megan, Cricut and the HOGS

When Megan handed out her cards to local veterans, they often belonged to other groups, like Rolling Thunder, a veteran’s organization that includes an annual motorcycle ride fundraiser. Megan has an affinity for bikers and had handed her cards out to Mike T., the president of the local HOG (Harley Davidson Owners Group) when we attended a food drive. Apparently, Mike saved the card, showed it to friends and they realized that Megan had been giving her cards to several of these gentlemen thanking them for their service for many years! They asked her to be an official HOG in 2017, complete with vest and hat. She has attended many biker events since and is happy to continue the tradition of honoring veterans as she hands out her appreciation cards.

I do not even know where to begin. When Ashish became CEO at Cricut, I reached out and told him who Megan was and how the machines have made her life so much more accessible. I explained how she can take part in events on her level, volunteer, and even shop for supplies making her more of a part of the community. People would talk to her about the machines, they would ask her to make things. This is how Megan became seen in a world that often ignores those in wheelchairs with difficult to understand speech. Cricut cared enough to let her be a part of the community. Even scrapbookers we know, as they aged and could no longer cut out shapes with scissors, would ask Megan about the machines and she would “demonstrate” how she makes for them.  Cricut also gave her a reason to be with the “regular” community and also helped my isolation as a caregiver.  We had to deliver the posters, we had to shop for cardstock. This is all very simple but when faced with caregiving all day, every day, this became a reason for us not to be isolated. Ashish always kept in touch, he sent her supplies to try out, he asked questions about the machines and her hands, he wanted to make things even easier for Megan. He sent her a new Explore Air, then a Maker, and now a Cricut Joy.  Each item has been an improvement with all of the populations in mind.  His generosity allowed Megan in her excitement to tell the world the next Cricut chapter. 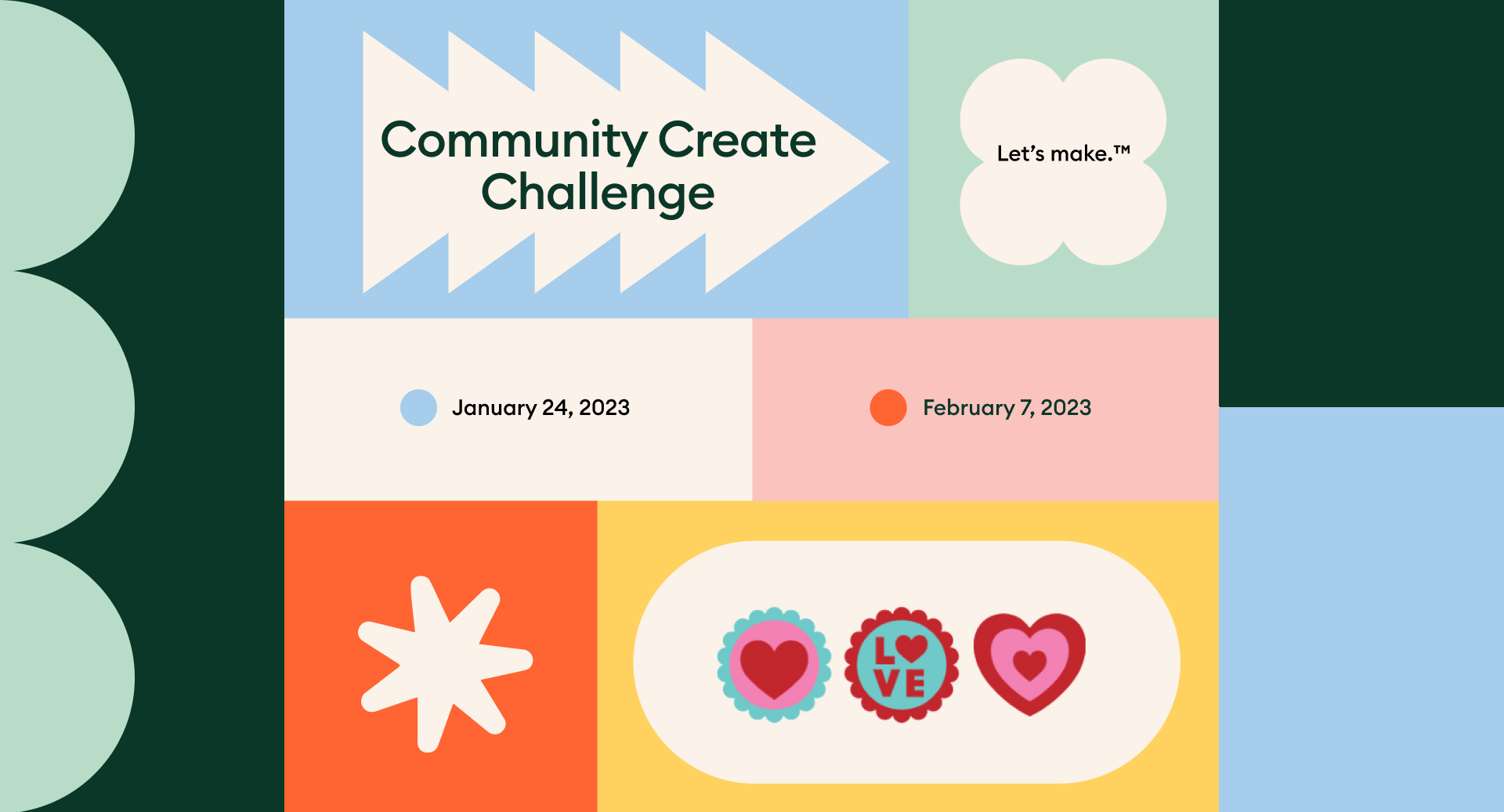 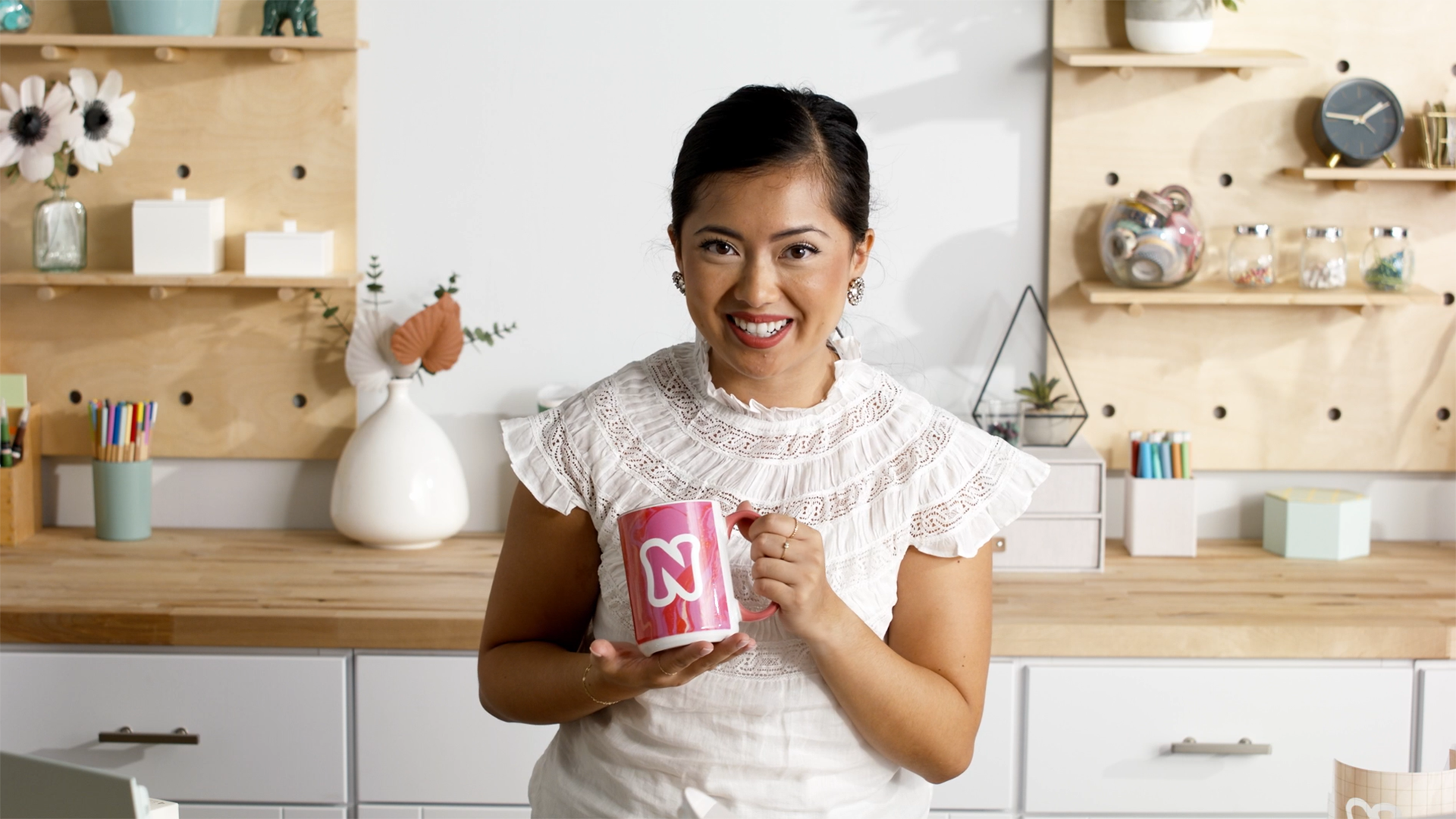 How to make a customized monogram mug with Cricut 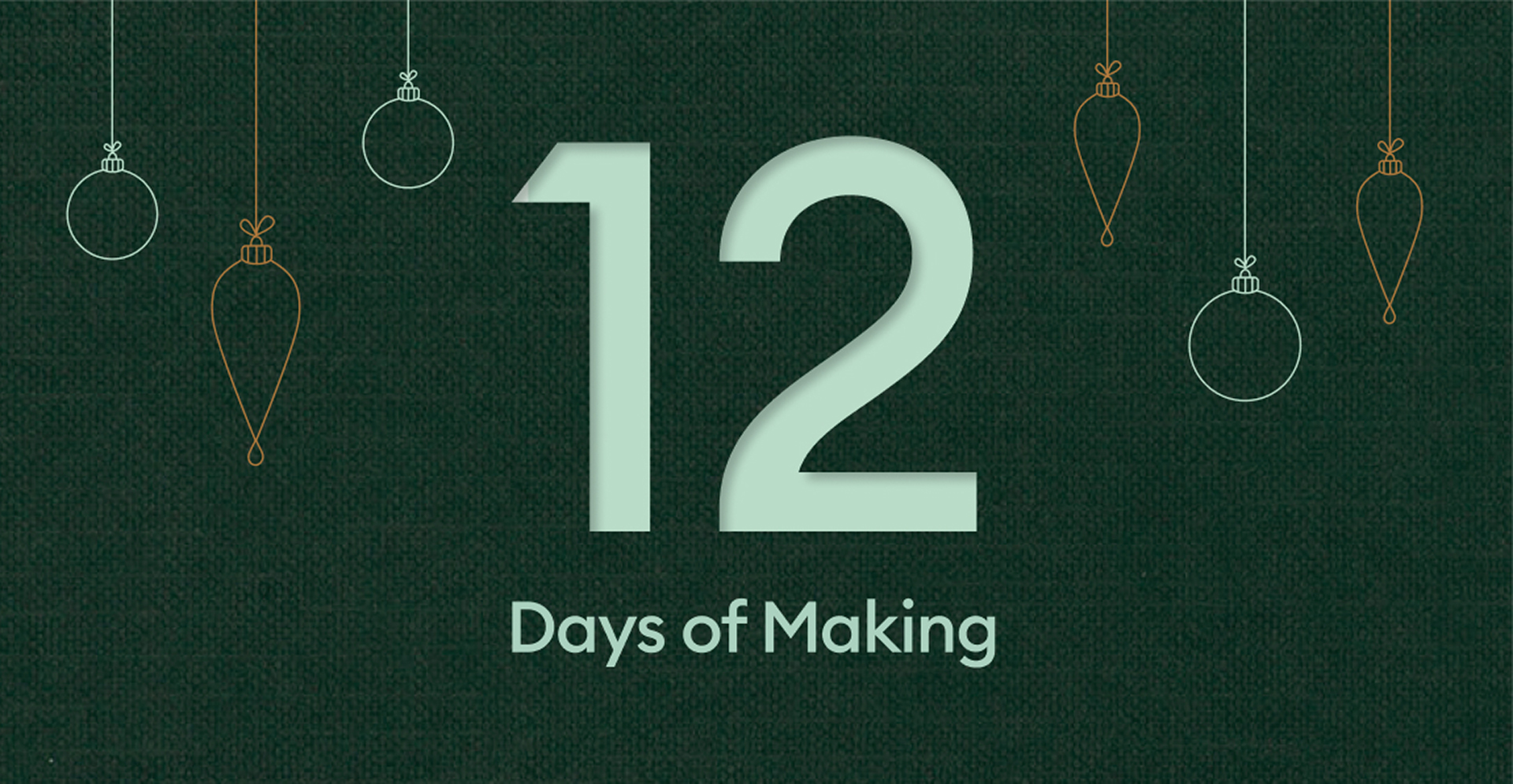 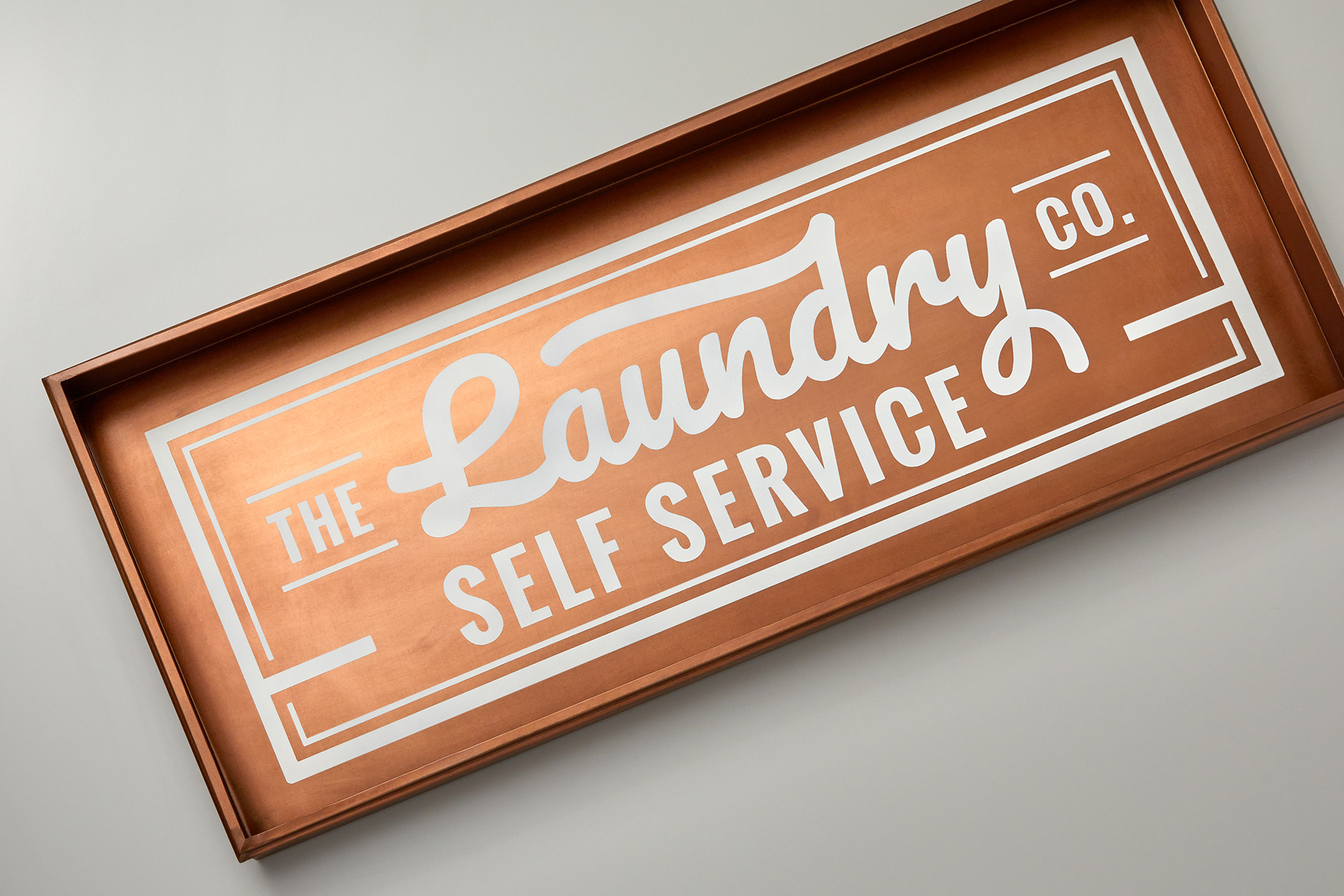 5 ways to clean up your laundry room 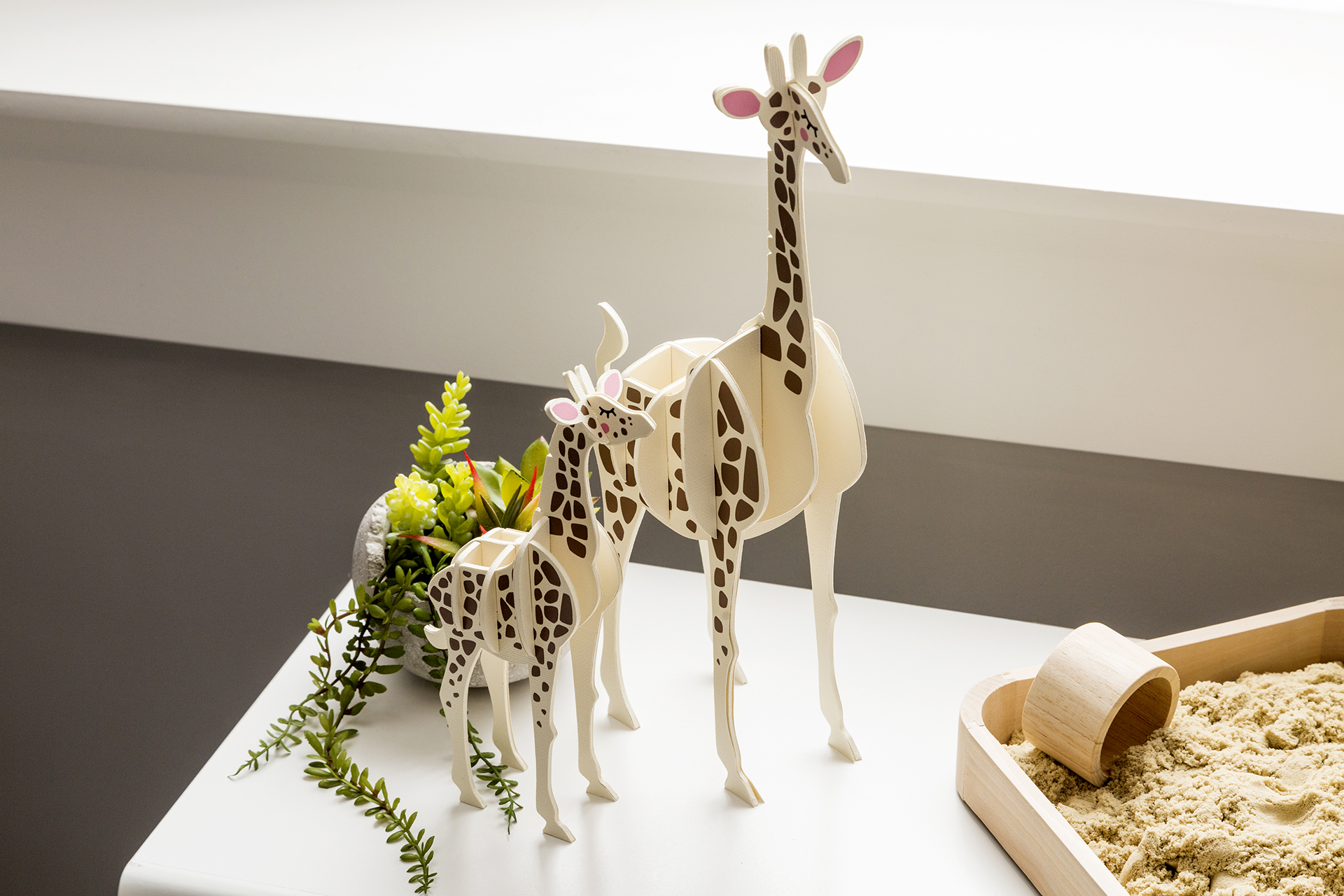 11 ways to tame your kids’ rooms 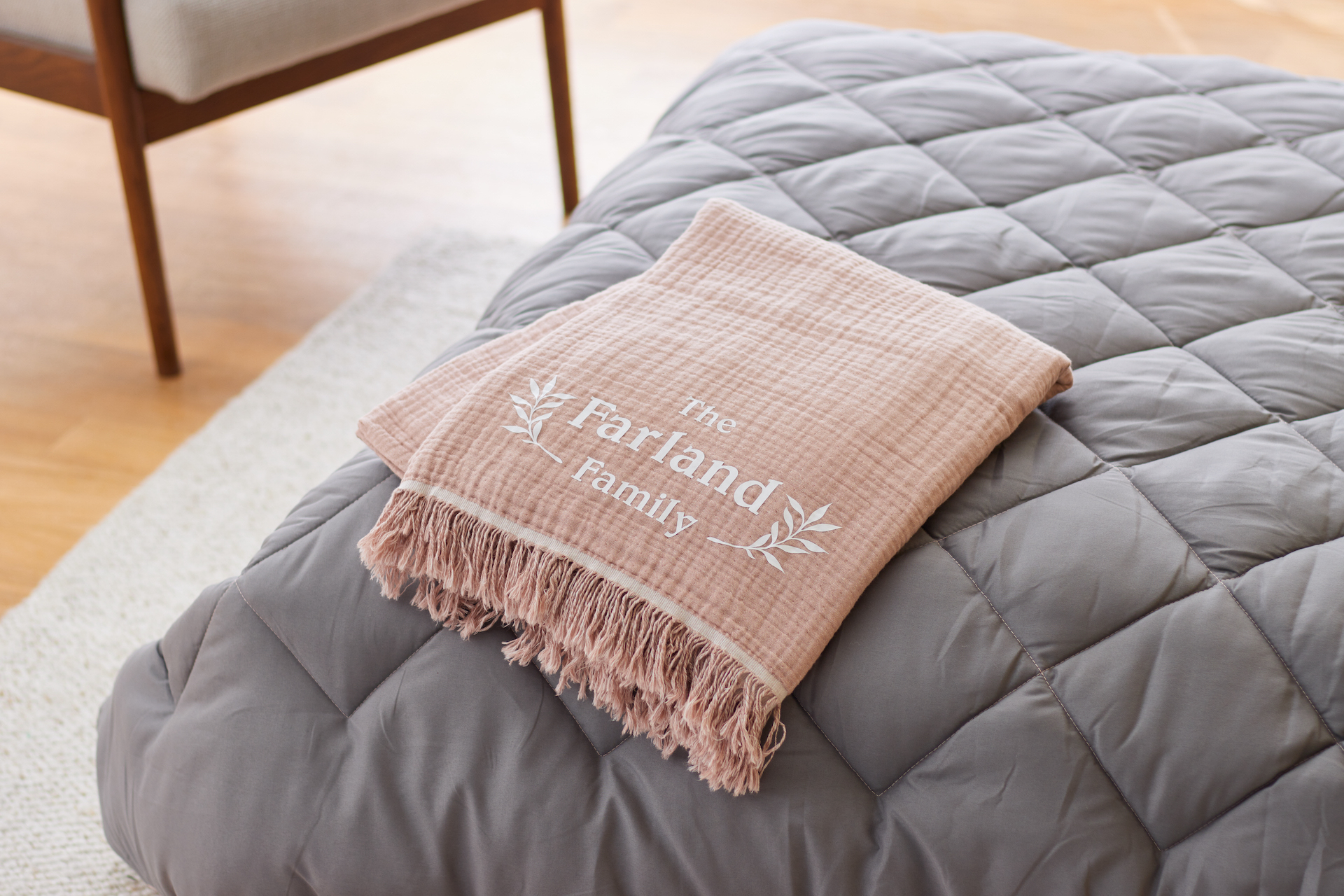 10 ways to beautify your bedroom 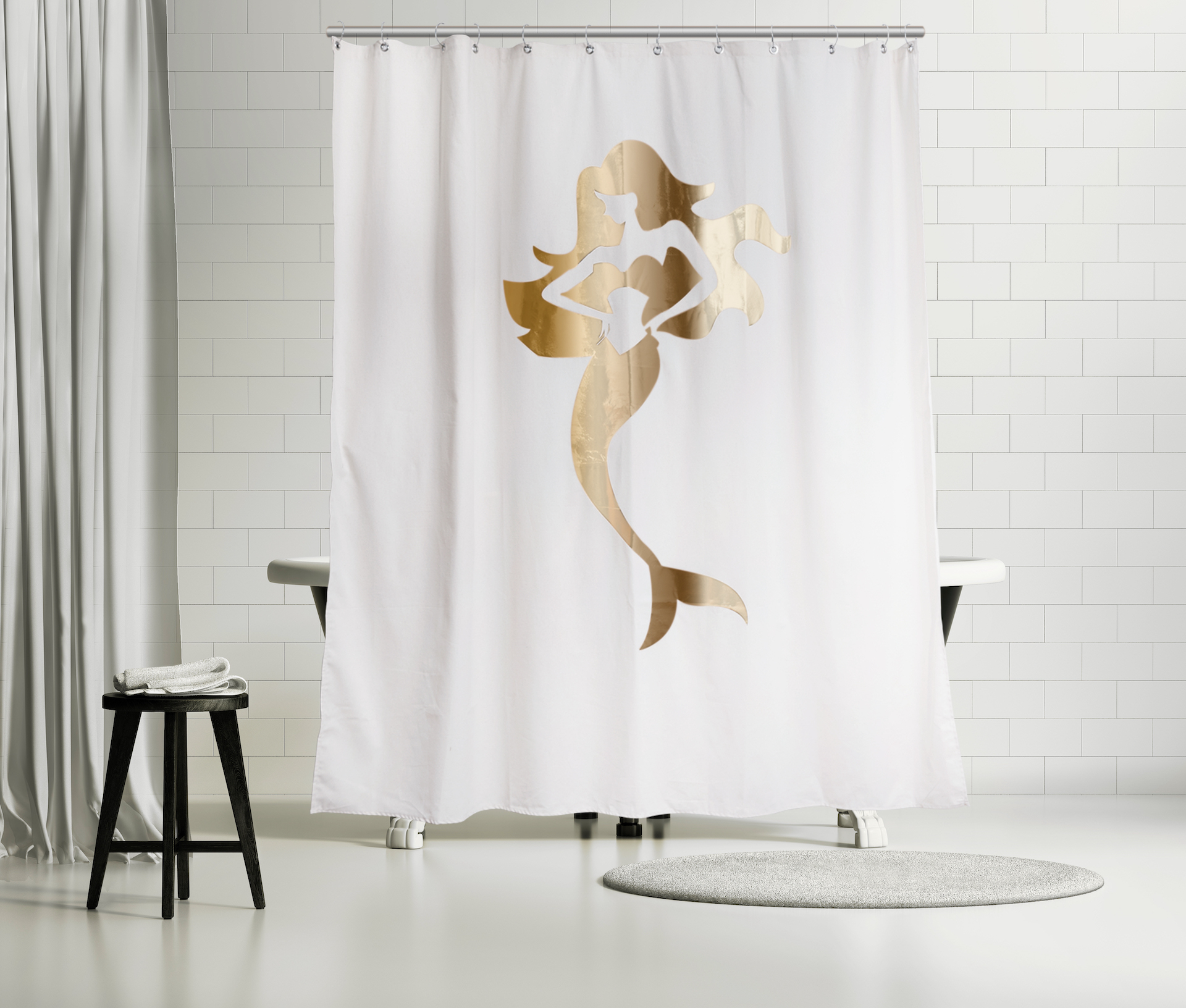 8 ways to freshen up your bathroom 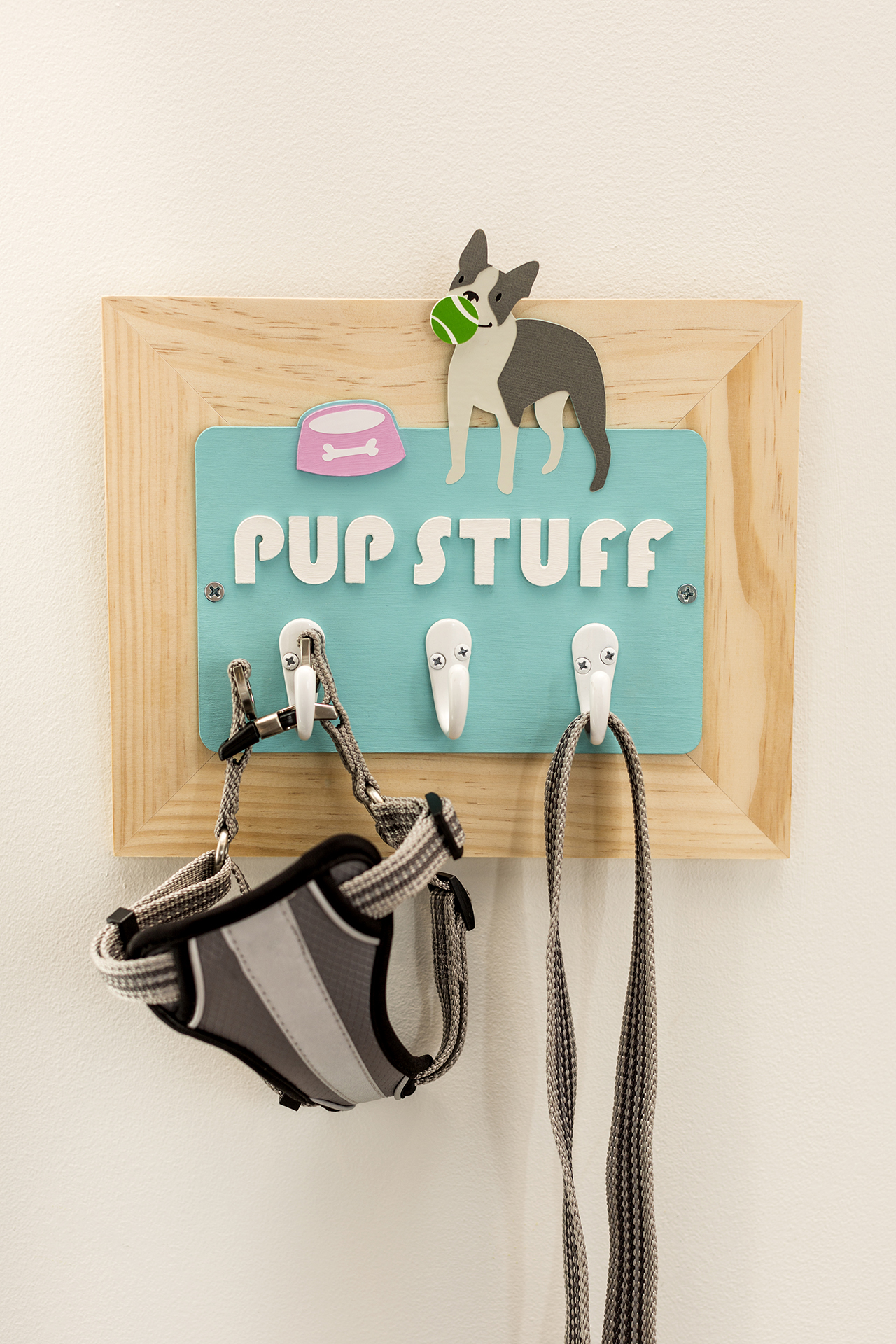 4 ways to pretty up your pet station 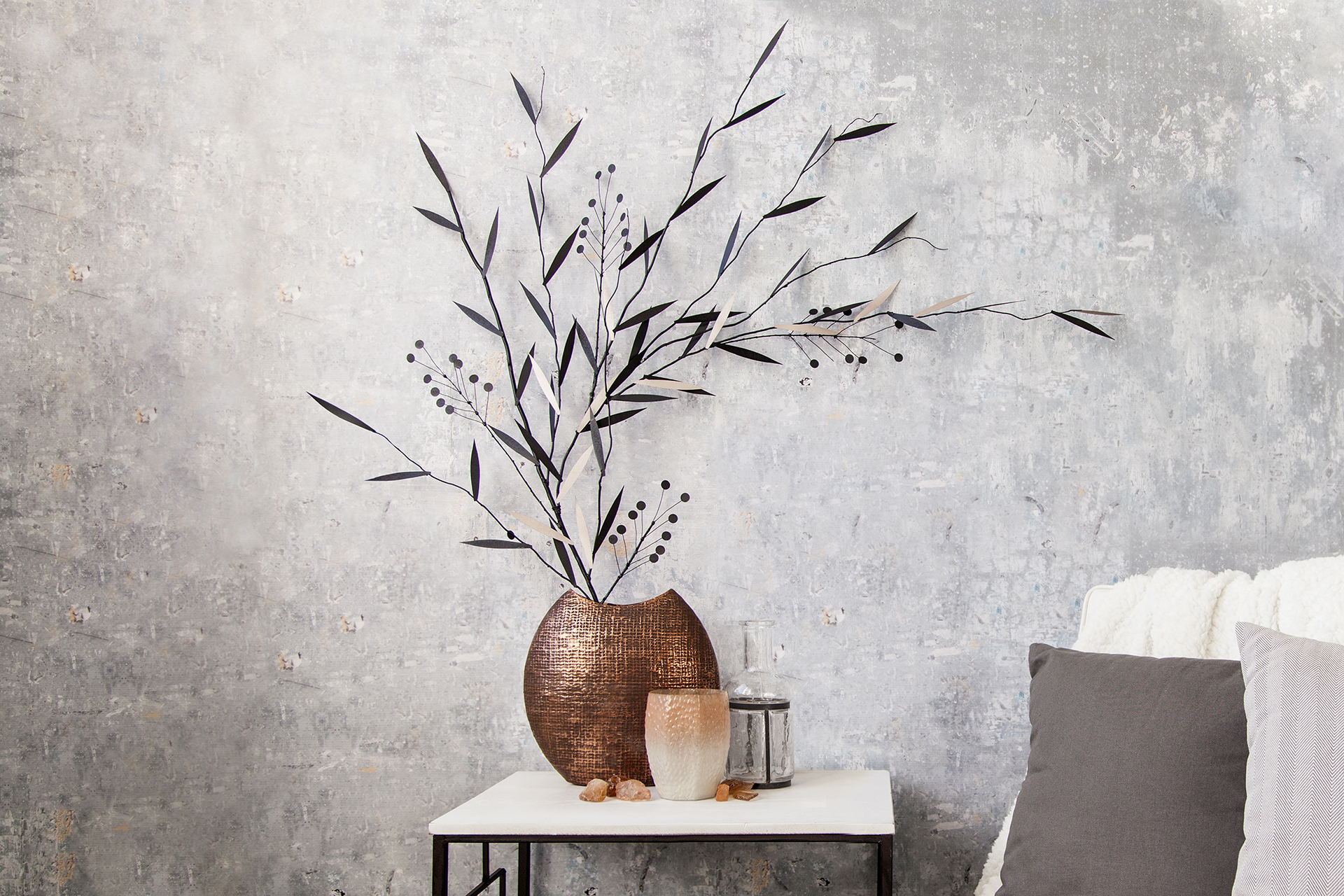 15 ways to love your living room 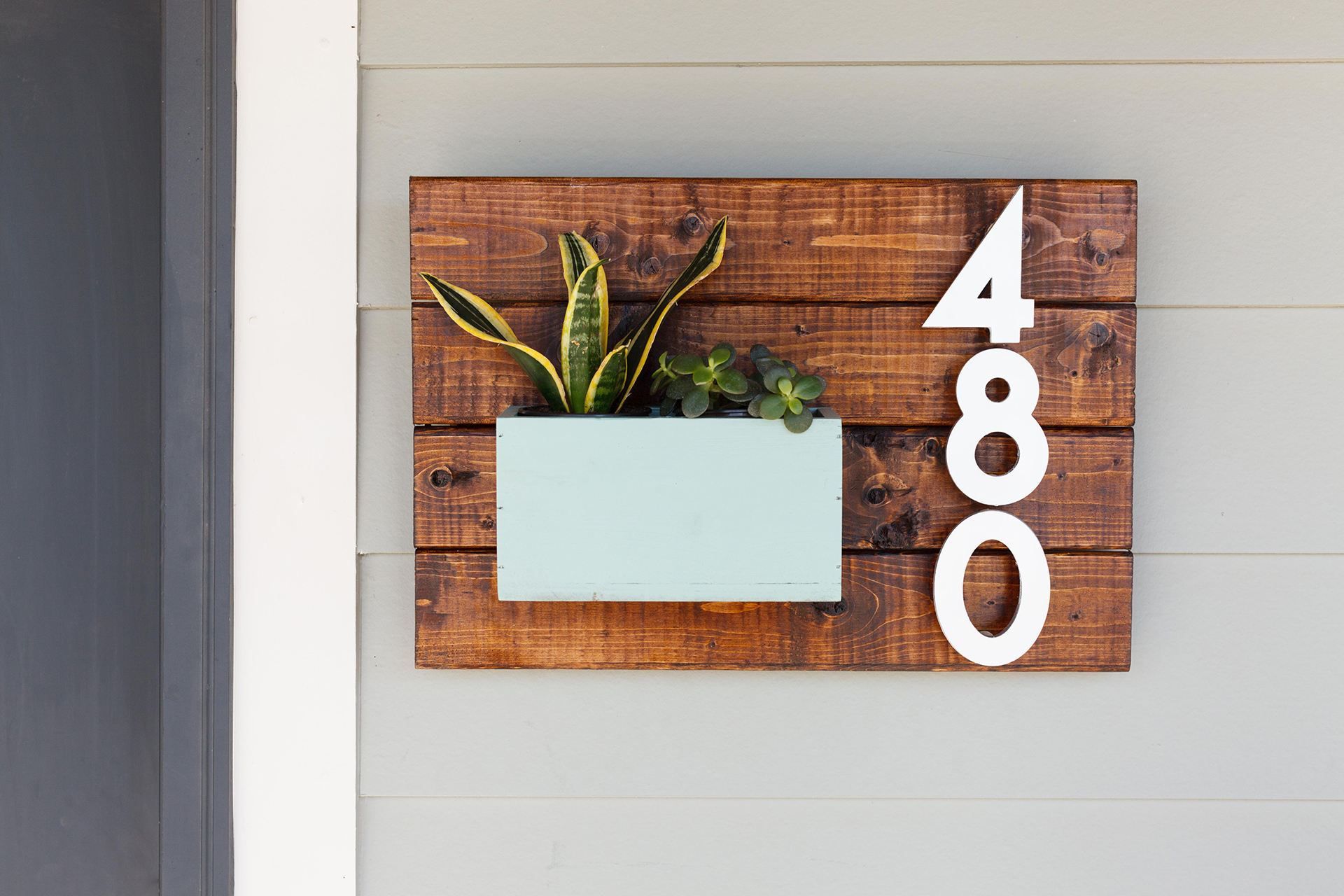 7 ways to update your entryway